I remember this one – loved it so much. Still do!

This one is still a little rough….

Ode to an Ark

My son walks a path both familiar and foreign.

I lay out the golden stones then watch him vanish.

Gone in a yawning, swampy place, dark with peril.

it lifts my son with love.

That love that is a balm for the loneliness of oddness, the pain of childhood’s shifting loyalties, that tidal swell that lifts me too.

It’s where we live.

With talking trees and brownies no one else can see.

And I can spy a child from where I stand,

more sensible than most.

She is not alone, and

This ark of families, of Pauls, of summer’s riding a swelling

wave of love that lifts us from the swamp,

that steadies my son’s journey,

that steers us to the Vast Blue Ocean –

It’s big enough a place for

all of us to

“There’s no mention here of real institutional barriers like rising tuition and decimated financial aid (it’s mentioned only in passing that one student is working three jobs).” My campus has a new Equity and Inclusion Facebook group. This morning, I noticed that a colleague who has an excellent reputation for work in education and social justice had posted a link (without comment) to an article from the Cal Berkeley’s Alum publication: The Struggle to Be First: First-Gen Students May Be Torn Between College and Home.

It’s a relatively long piece for an alum publication, and author Alina Tugend has talked to authors who have done research about First Generation students and contacted programs in other places.  I believe that she set out to write a comprehensive and empathetic piece.

And still, I’ve read and reread the article multiple times and cannot find a single reference to any strengths that First Generation  — or their families — bring to the college experience beyond mention that one young woman…

Very worn out post-holiday, so I am sharing this again as a little pick-me-up. How are you doing?

Ode to a Bean

for Dan and Dan of Fojo Beans

I found a poem in a cup.

When the poem was smooth and brown,

I drank it down.

When the poem was hot and black,

it called to me.

I threw it back.

When the poem was sweet and mild,

It warmed me and it woke me up.

I found a poem in a cup.

We are trying to learn Korean now as a family. I need to keep this handy!

I’m sure some of you who watch kdramas are already familiar with the titles used in the family, as in how a  person address his or her family members. I got used to hear a servant or maid calling the young master and miss as doryeonnim (도련님) and agasshi (아가씨) in dramas but when I watched another dramas, I was surprised to hear a woman addressing her younger brother and sister-in-law as doryeonnim and agasshi. I then realized that there are various ways of calling your relatives in Korean culture. It’s not as simple as uncles and aunts!

I believe a surprise from the book store is needed by Son 1. But I better read it first, just to be safe *ha!* (I admit it – mostly, I do this to read these books in peace). 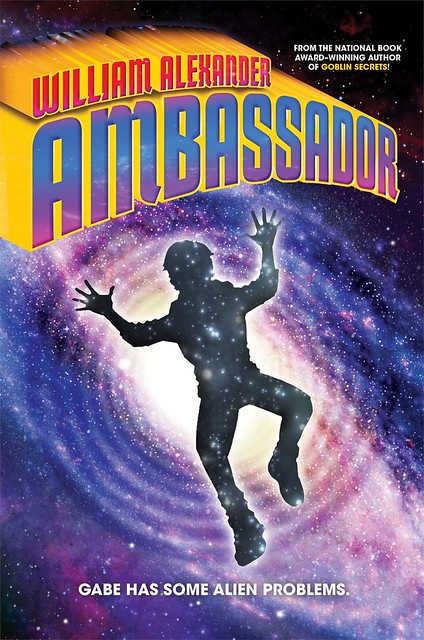 Who would you want as the first speaker to an alien civilization? National Book Award winner William Alexander proposes an intriguing candidate in his middle-grade novel Ambassador, and after reading his Big Idea piece, I can’t say I entirely disagree with him.

I love the word “ambassador.” I remember rolling it around in my eleven-year-old brain while watching Star Trek TNG. Ambassadors command reverence and respect. They defeat villains by knowing what to say and how to listen. They can end wars with words. Supposedly. Federation ambassadors seem to accomplish all of these things offstage, but on board the Enterprise they suffer tragic deaths or are otherwise incapacitated right before a commercial break. Then Picard takes over, quotes Shakespeare, and fixes things. I wondered what an ambassador might actually do if they could just live through the commercials.

“Neoteny” is another favorite word. It means “the retention…

Everyone was busy that day. At least no one was answering their phones.

Darth found a baby squirrel on the driveway. It appeared to be having seizures and the flies were settling in. He brought it water – which it reached for and knocked over. Darth herded the boys away and told me he thought the squirrel had been poisoned. He’d found a dead adult, possibly the mother, days earlier. I speculated that it was pesticide poisoning – and told him about the Mocking Birds I used to find having seizures in the road back when I lived in Florida. They’d eaten bugs spayed with “cricket bait.”

“Not everyone understands pesticide is poison,” I said.

Son 1 and I started the rescue process.  We shooed the flies away, I pulled on the gardening gloves, found a box with a lid and punched holes in it.  Then we got the squirrel into the box. Son 1 talked to the squirrel and peeked in on it. A lot. Darth began calling around to get help tending to the little critter. No one who answered the phone that day was able to take a baby squirrel.  They gave us numbers for folks who could.  But when we called those numbers, the phones rang and rang – and rang. Finally, one number answered, and for a moment, we were flushed with –  success!  But it was just a message saying they were full and could not take any more animals.

Animal Control referred us to our local animal shelter. They didn’t answer their phones either, but I knew they were open. So Son 1, the squirrel in the box and I drove over.  They told us, unless it was our pet squirrel, they could only take it to euthanize it*.   They  gave us another number to call.  I called and called, and no one answered. By then, Son 1 and I were in for whatever it took – we’d look after the critter ourselves if necessary.  So we drove to the drug store and I bought a syringe and some water.  Son 1 waited – with the squirrel in the box – in the van. He was talking to it when I went inside the store. I don’t know what they talked about though.  Neither one ever said.

The squirrel drank a little water from the syringe and started to get perky.  And so…we drove home – Son 1, the squirrel in the box, and I – making sure the lid on the box was secure. I looked up baby squirrel care on the Internet, grateful that my profession had taught me how to weed out the useless and the absurd.  We determined it was about 5 weeks old and that we needed to keep it warm.  I held it and we fed it warm goat milk from a syringe.  The boys helped.

We learned it would be 10 to 13 weeks of care – with efforts to keep it wild – until the squirrel could care for itself outdoors.  With all the cuddling available at my house, it was unlikely it would be wild after 2 weeks, let alone 10. But there was nowhere to go.  I tried a  few more places – where I was told to put it back outside and “let nature take its course.” We understand that animals eat other animals.  We do. Even my four-year-old gets that. But we were invested (at the very least) in making the little guy comfortable by then. We were not going to put it back outside to watch it suffer and die.  Not once we’d come this far.  And a few hours later, some friends of Son 1 came by on their bikes and said…there’s a baby squirrel on your sidewalk, shaking and covered with flies. They gave me a strange look when I exclaimed “Another one?!”

We repeated the process. And after dinner, we went to Wal-Mart (the only place open by then), and bought the world’s ugliest cat carrier  (an electric pink zebra print), a heating pad, and some puppy formula. We fed the squirrels, warmed them, and I washed them and tried to help them pee (yep, that’s really a thing). They didn’t want the puppy formula though – goat milk was the thing.

Monday I sent out a plea on Facebook for animal rescue centers…and was referred back to places we’d already tried.  Then my friend Andrea recommended Greenwood Wildlife Rehabilitation Center.   Greenwood – that’s the name of the town my folks grew up in – many many states away. It was a long drive, but the synchronicity felt right.  The folks at Greenwood urged me to stop feeding the babies. They said they could easily get the liquid into their lungs. We stopped, and found it felt like loss – feeding baby animals is gratifying. But we stopped.  We did.  Then we hurried them to Greenwood, where they welcomed the two little guys – who by then we’d named.

I called on Tuesday to check in and Buddy and Snugly were doing fine. That’s Buddy on the right – he’s the first one we found.  Snugly on the left was worse for wear, the same age, but smaller. And yes, I’ll be calling to check on them again soon.

It was good to know they were in a safe place with knowledgeable care, but it was tough to let them go.

Son 1 wants to work with wildlife now. Darth said we should keep the cat carrier handy “in case it happens again.” Son 3 insists on looking for baby animals every night now.  Son 2 did the same for a few nights – and decided that this rescue was complete.

Have you ever found an orphaned or injured animal? What happened? How was the experience for you?

*If it had been our pet squirrel, they could have tried to rehome it. Son 1 and I joked about how awkward it would have been to have said “Oh yes, it’s our pet” then try to go back hours later with a second squirrel!  (We would not really have lied, but it was an interesting scene to play out)

This happened in my backyard 🙂

“Do what you love” disguises the fact that being able to choose a career primarily for personal reward is an unmerited privilege, a sign of that person’s socioeconomic class. Even if a self-employed graphic designer had parents who could pay for art school and cosign a lease for a slick Brooklyn apartment, she can self-righteously bestow DWYL as career advice to those covetous of her success.

If we believe that working as a Silicon Valley entrepreneur or a museum publicist or a think-tank acolyte is essential to being true to ourselves — in fact, to loving ourselves — what do we believe about the inner lives and hopes of those who clean hotel rooms and stock shelves at big-box stores? The answer is: nothing.”